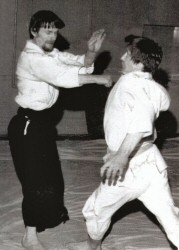 Aikido Riai means aikido complete; this must include atemi and weapons training. Some aikido groups do not use weapons training saying that the use of a weapon is against the pacifist nature of aikido. There is a great difference between one who shall not fight until all other avenues have been tried and a pacifist who shall not fight for any reason. A martial art cannot be a pacifist art.

The use of weapons in aikido brings zanshin awareness before, during and after a confrontation to a higher level than in hand techniques. The element of danger does this. The triangular evasive entry is highlighted. Accuracy is developed as well as courage to stand in ai uchi; that instant when should both attack simultaneously both shall be cut. The principles ofsuki (seeing and seizing any openings, spiritual or physical, in the opponent) is fundamental to sword and stick work. The major principles of ki ken tai ichi (the use of the spirit or intention within the body and technique applied as one) is more easily learned during weapons training.

We must embrace aikido in all of its aspects, including weapons. We should not take some pieces and deny others. Some say they are practising hard aikido while others say they are practising soft aikido – this is all nonsense. Aikido, like the Japanese sword, is the perfect marriage of hard and soft. When asked what my aikido is like I always answer it is not my aikido it is O Sensei Ueshiba’s aikido. Although I have been training for more than forty years I have never wished to have my own aikido; I would much rather have my character become aikido.

We must not change the art to suit our choices, rather we must allow the art to change us.

No other principle in aikido has been more misunderstood or misrepresented than the principle of harmony. Where harmony already exists there is no need for aikido techniques.

Many teachers demand harmony from students from their first training sessions. Little or no resistance at all is given, with the receiver actively aiding his partner in the execution of the technique. Initially tori must harmonise with Uke by seeking out his weak points so as to unbalance him.  Uke must give a sincere, accurate and committed attack.  Tori must develop the confidence to move accurately in time and space to defeat the attack. Any harmony from uke defeats the purpose of training.

At an advanced level, Uke may have to harmonise once his balance is broken so as to execute a safe breakfall. Theaikidoka learns to harmonise with the attacker with the express purpose of breaking that harmony so as to destroy the attacker’s balance prior to the throw or pin. A properly executed technique breaks the timing, distancing and balance of the attacker.

Harmony in aikido is the ability to cause the attacker to move where and when to the dictates of the aikidoka.